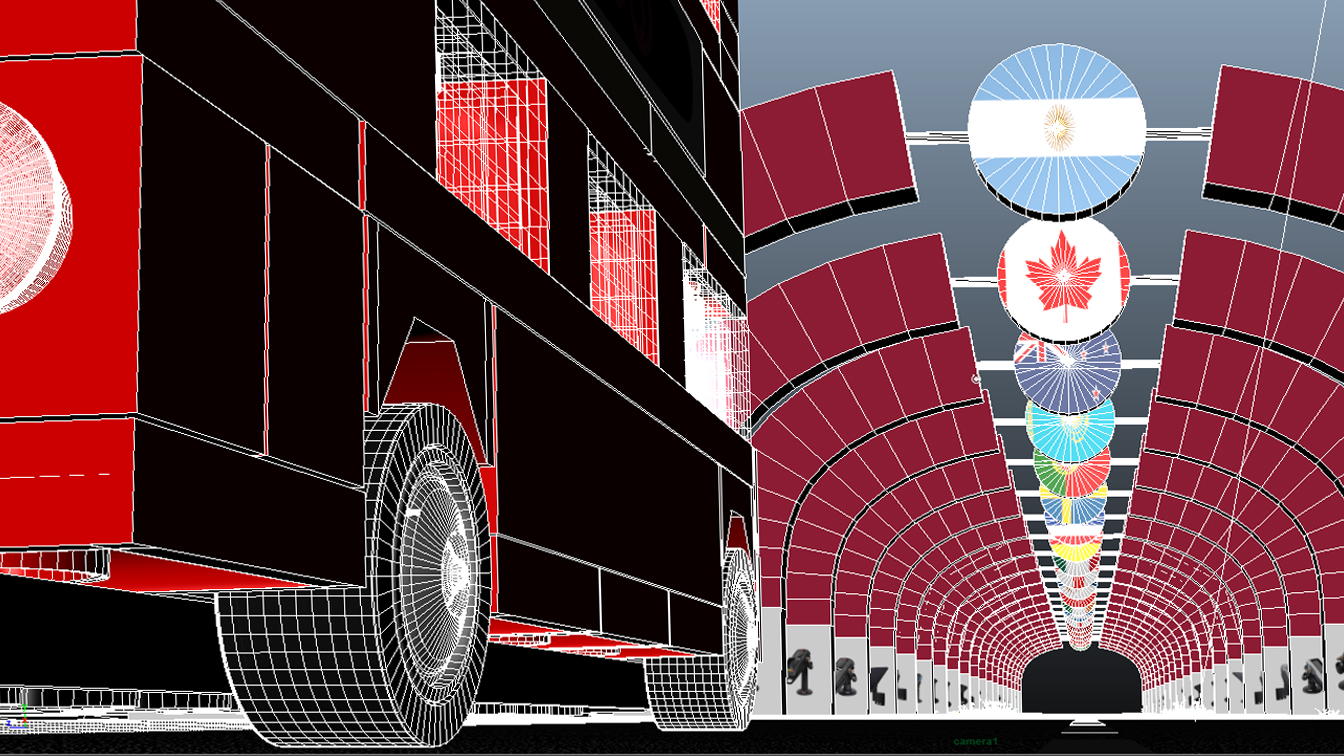 I’m working on this for Tailwind Solutions Ltd. Full HD 1920 x 1080px. I was handed a model of a Westminster bus built from Lego pieces, with Tailwind branding, which they wanted to trial as an marketing asset. The brief was to produce an animation of the bus trundling along and to show the countries the company sells to worldwide. I built a scale model of the model bus using Autodesk Maya and Adobe Creative Suite. I rigged the bus for the scene and set up automated cameras and lighting (using Mental Ray/ Physical Sun and Sky). Modeled land/vegetation. Post production in Adobe After Effects (such as colour correction – Work in progress. Camera angles ‘1’ and ‘3’ now added and a rough audio treatment applied. Update: No longer live. This idea was abandoned shortly after I received the brief (and before the company had had a chance to view initial workings/ideas – I created a large amount of assets in the first week after having received the brief which can be viewed below). While company representatives were very impressed with the volume and quality of work I had undertaken in initial stages, they had a change of mind about using the ‘Lego bus’  idea as there is no connection to what the company actually delivers. I raised this issue in initial meetings, and I wholeheartedly agree with the company decision to abandon this marketing strategy. That being said, I feel the below animation does demonstrate many of my skills in design for the moving image.

For Tailwind Solutions Ltd. Created using Maya, Adobe Creative Suite and Avid Pro Tools. Full HD 1920 x 1080px. I produced a vector of the Tailwind logo using Illustrator which was then imported into Maya and a 3D model created. Lighting and cameras were set up. I tested various methods for creating the snow (including Maya dynamics which rendered far too slowly). I settled on rendering out a Tiff sequence from Maya which was imported into Adobe After Effects. Colour corrected here. I used the Trapcode Particular plug-in to create the snow and added turbulence, gravity and wind direction set in 3D space to give a believable sense of snowfall. I did the sound treatment using Avid Pro Tools, and exported everything to Avid Media Composer for post production.

Note : The original Tailwind logo is not designed by me. I re-created it in the 3D environment to produce these animations.

360° Virtual Tours/Graphic Design/Motion Graphics. Graduated from the Glasgow School of Art with a Master of Design in Animation, a Bachelor of Arts in Art & Design and Visual Communication Higher National Diploma. 15 years experience of digital design for print and screen.

View all posts by Caoimhin Watts →